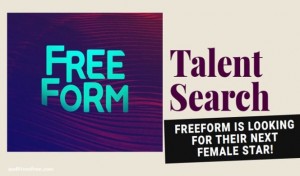 The auditions for this exciting upcoming television project will be held online, making the opportunity available for multiple people!. The actresses who fit the description would be required to download the monologue to perform on and share their videos to the email address given. All monologues will be provided ONLY to people we are interested in working directly with. The actresses would be required to create their own video with the script in their unique style for the auditions for the lead roles. Make it comedic or make it dramatic, it’s totally up to you.

Following are the details about the role requirement for Freeform network’s upcoming project:

About The Submissions
Following are the details pertaining to the submissions of the online auditions:

If you’re interested in being part of a Freeform Network project, as a lead role; hurry up and set your cameras for the online audition submissions, the good part is if you’re dissatisfied with one of your videos, there’s always a chance of recording another. If any of your friends are interested, inform them as well about this wonderful opportunity.

One thought on “Casting Call for Disney channel show!”