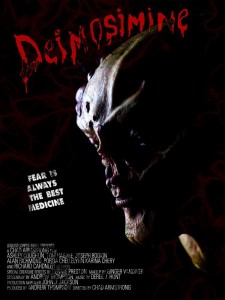 LeglessCorpse films is currently in search of an actress who can play the role of Sarah in the horror film DEIMOSIMINE. The film is in production, directed by Chad Armstrong, the founder and Editor-In-Chief of LeglessCorpse. He is known for owning and operating Horror inside the box and his works with Crypt TV.

The Actress needs to be around 45 to 46 years old. The role depicts here as being somewhat whimsical and also the owner of a doughnut shop. Since it is a horror movie, the film will be featuring graphical representation of violence, harsh language and some nudity and sexuality, however for the role of Sarah only violence will apply to this character.

A horror movie, the main plot details and credits are written by Andrew Thompson, who has notable contributions to the short horror films Infected and Mortality. The film’s main story line revolves around a heroin addict that undergoes a drastic new kind of treatment for her condition. However, the drug ‘Deimosimine’ turns her into an embodiment of pain and terror. Is she the victim? The monster? Or both?

Founded by Chad Armstrong, this platform has been dedicated to filming indie horror movies and films. The website features horror news, reviews, interviews and videos. The entity holds competitions and contests and much more including T-shirts and posters.

Since the movie is going to be featuring a lot of special effects (FX and SFX both), interested candidates would be working with SFX makeup on the set, presumably, and there might be scenes where the candidate might often need to work with prosthetics. There is also a chance that some costumes including latex may also come in handy at times.

The film is going to shot during July through September this year. Shooting is often gong to primarily on weekends only, and location for the shoot is going to be area around Huntsville, Alabama only. It is also important to note that all candidates must know that the crew on scene will not be responsible for providing travel and lodgings facility to actors and actress; they must make their own accommodations. The crew on site will however provide food on set to all applicants and candidates.

This role of Sarah and others similar to it are all paid roles. However cast and crew are often found to be accepting deferred payments. The distribution deals for physical and digital media have already been made in advance by the LeglessCorpse Corporation.

Those who are interested should send their headshots and resumes to mytmaus@leglesscorpsefilms.com. Those applicants that get chosen will be further required to submit a video media for further consideration of their audition.