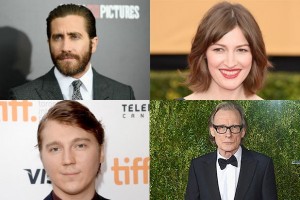 Okja is an upcoming film which has already found acclaim. Its filming commences in a few days. It is designed to be a wonderful science fiction movie. It is however tilted towards the audience that loves horror movies. Some of the top stars who are taking part in the movie are Jake Gyllenhaal and Steven Yeun.

The executive producer of the film is Brad Pitt. The film is sponsored by Netflix who have put their $50 million in this South Korean movie venture. The film is expected to be completely filmed in New York during 16 July to 24 July.

The film is produced by famous South Korean film director Joon-ho Bong who is famous for producing the recent Hollywood thriller film, Snowpiercer. He is also famous for creating films that have mood shifts and very dark humor. His film Snowpiercer has gained universal acclaim and critics around the world are eager to receive Okja as well.

Jake Gyllenhaal appears as a star in the movie and has a history of performing excellent supporting roles in movies such as Brokeback Mountain, Source Code, The Day After Tomorrow and Prince of Persia: The Sands of Time. Steven Yeun is the other star in the movie. He is a Korean American actor famous for his recent role in The Walking Dead series.

The filming of this film will happen in New York at Manhattan on 16-17 July and then on 23-24 July. The filming will also take place in an open environment. The shooting will mostly take place in the early mornings on the marked days which are Saturdays and Sundays.

The Hollywood Reporter has given some information about the plot of Okja. The film centers on a girl and her friendship with a large and unique animal Okja. The girl looks to save her friend from a company that wants to take over the animal for their own gains.

The current casting call is for both male and female actors to play people present in a parade. All people interested in taking part in the filming need to be non-union members. The selected individuals will have to stand for long stretches of time due to the need of filming. The age of the candidates needs to be in a range of 18-60 years while people of all ethnicities are welcomed for the roles.

There is a standard pay rate, which will apply to all actors taking part in this venture. Each person will get $100/10 hours which is standard non-union pay. Only local people are encouraged to apply for this opportunity.

All people who are interested in taking part in this filming should immediately email to gwcasting@gwcnyc.com. The subject line of this email needs to mention “FB: Parade Goer Avail”. Other details that should be present are listed below: