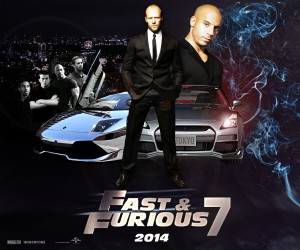 If you love fast cars and action than this is the movie for you. Several months ago we learned that Fast and Furious 7 was a go and now the casting directors are looking for numerous extra and stand in roles.  Paul Walker, Vin Diesel, Dwayne Johnson, Michelle Rodriguez, Jordana Brewster, Tyrese Gibson, Chris Bridges, Lucas Black and Jason Statham so far have been confirmed, and will all reprise their previous roles from the franchise. The casting directors for the new film are now looking for male and female talent of all ages for several race scenes. Do not miss out this awesome chance to be apart of one of the best movie franchise in Hollywood history.

A post-credits tease during Justin Lin’s final Fast & Furious adventure revealed a big moment in his first, The Fast and the Furious: Tokyo Drift.  No longer does Sung Kang’s fan-favorite Han meet his demise due to a random car accident.  Instead, that wayward Mercedes is driven by Jason Statham as Ian Shaw, eager to make Dom and company pay for the death of his villainous brother in Furious 6.

So Fast & Furious 7, currently in production, will find our heroes going up against a foe so formidable only Statham could play him.

The casting directors are now holding auditions for male and female extras and stand in roles for the new Fast And Furious film. If you are interested in auditioning please submit your information along with a recent photo and contact information. Do not miss out on this chance apply now.

One thought on “Fast And The Furious 7 Extras”