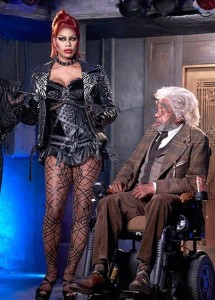 But the most iconic role of all, the Transvestite from Transylvania, Dr. Frank-N-Furter, is played by the Orange is the New Black star, Laverne Cox.

According to Entertainment Weekly, Cox’s costume is quite different from the original (see below), as they wanted to make this show feel like their own. Cox’s costume (created by William Ivey Long) is more elaborate and couture.

In her exclusive interview with Entertainment Weekly, Cox calls the experience “Magical” when it comes to the musical numbers. When she started training, she started using her chest voice, but for this character, she needs to use her more natural baritone register. She says it was also fun to play with the higher notes in her register as well.

These sneak peaks are definitely piquing our interest. Who is looking forward to watching this new version of the classic The Rocky Horror Picture Show?