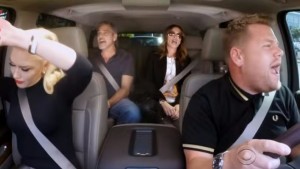 Global superstar Gwen Stefani, joined by Occar winners Julia Roberts and George Clooney, were the most recently celebrities to be featured on popular segment of James Cordons “The late late show” May 4th, 2016. The scene started out with Gwen and James singing along to some of her famous hits including “Don’t speak” & “The Sweet Escape”, and the fun continued when Clooney and Roberts joined in with the group singing to Queens Bohemian Rhapsody.

Gwen, who was last seen on “The late late show” in March promoting her single “Make me love you” recently released her 3rd studio album “This is what the truth feels like”. Clooney and Roberts star in “Money Monster”, an upcming film thriller that follows a popular televison personality (Clooney) who has been taken hostage by a deranged viewer. The film is set for release in the U.S May 13th, 2016.

Which song that was performed was your favorite? Who would you like to see in the next segment of Carpool Karaoke with James Cordon?

Check out the link and let us know what you think!