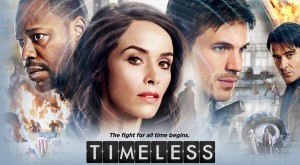 The show is about a criminal who steals a time machine and ventures back in time. It appears that he is trying to remake history by changing certain aspects of the past. A motley group of a soldier, a scientist, and a history professor are sent back in time in the prototype of the time machine, to try and stop him. Not only do they have to stop him, but they have to make sure that they don’t accidentally rewrite history themselves.

Can this handpicked team uncover the mystery behind it all and end his destruction before it’s too late?

Timeless, directed by Neil Marshall, was entangled in tense negotiations between producing studio Sony TV and NBC, which, like ABC, insists on in-season stacking rights for all new series.