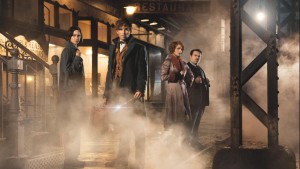 “Fantastic Beasts And Where To Find Them” is an upcoming film based off of the book of the same name written by fantasy author J.K Rowling. The film focuses on magical creatures being brought to America via a wizard that is sent there from Hogwarts. The film takes places 70 years prior to the Harry Potter film and books and has more of a focus on the fantastic magical creatures that inhabit this fictional world. The film is set for release November 18th, 2016 and is the first of a trilogy that will be written and produced by J.K Rowling. The films are slated to be directed by David Yates, whom fans will remember from directing Harry Potter films 5-8.

What are you most excited about with the film and trilogy? Share your thoughts in the comments section!